How to find our products?     My Account
HorticoledActualitésLumens, Lux, Candelas,PAR, PPF, PPFD, DLI – Units of measurement and terms to qualify horticultural lights.

Units of measurement and terms to qualify horticultural lights.

Everyone knows what « Lumens » are from Physics class… But what about PPFD, PAR, PPF?

Until recently, the lack of light intensity in LEDs was a limiting factor for many gardeners and greenhouse growers indoors. We understand better now how plants use light, and the technology has evolved enough to create quality horticultural LED. The units of measure have been refined and new ones were created to measure the light intensity used by plants.

The first units of measurement was lumens, candela and lux.

Lumens measure the flow of light, that is to say the total amount of light generated by a device. This measurement is used primarily to determine the actual brightness from a source of bare light. It can also assess the performance or efficiency of the light source, when compared to Watts. A lamp 20 lm / Watt will consume 5 times more electricity than a 100 lm lamp / Watts for the same amount of light.

The candela also measures the amount of light but emitted in a certain direction, unlike the lumens that give no indication of the light distribution. We then speak of light intensity.

These three units of the light measurements are still used by some gardeners. The major problem is however they were created to measure the perception of light by the human eye. Plants have a different perception of light and use only a portion of the light spectrum for photosynthesis. Through photosynthesis, plants convert light energy into chemical energy, food, in order to grow and prosper. New units of measurement were therefore created to take this into account.

Then, light for plants

As we said, plants do not « see » the light the same way we do. They use it in photosynthesis to a certain band of light which is called the Photosynthetically active radiation (PAR) or radiation between 400 and 700 nanometers, from blue to red. PAR itself is not a unit of measurement, but an indication of the spectrum useful for photosynthesis. Parenthetically, the main drawback of the PAR is that it does not take into account the wavelengths below 400nm and above 700nm which are nevertheless useful to the plant in other mechanisms of photosynthesis. But since it must be a basis for calculation, photo-biologists have developed several parallel units to measure the light energy generated by a light source and useful for plants. 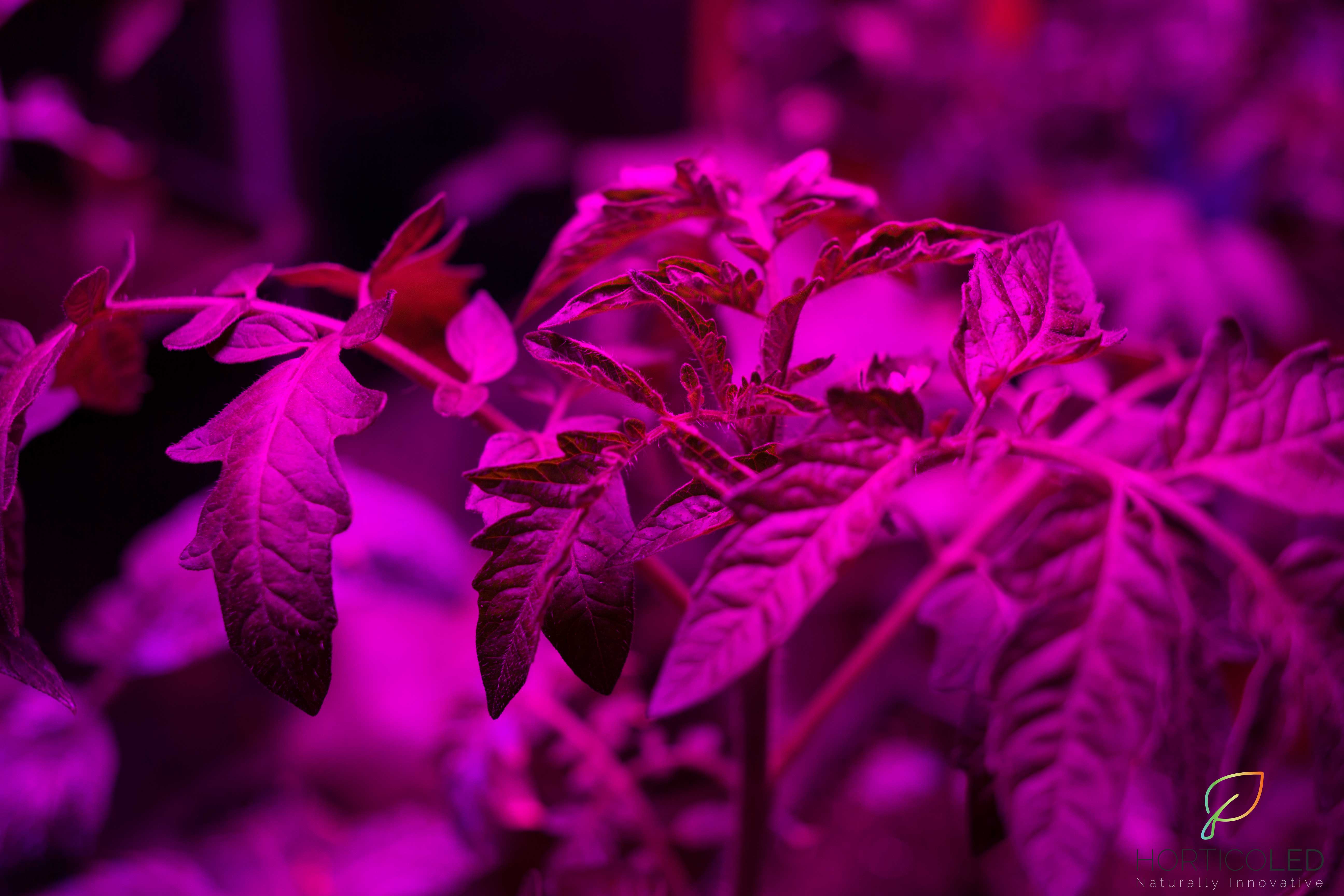 The Photosynthetic Photonic Flux (PPF) is used to measure the entire PAR light emitted each second by a light source, like your horticultural LED for example. In other words, the PPF tell us how PAR is emitted by a light source per second. They are expressed in micromoles / second. Like the lumens, the PPF gives no indication of the amount of photons that actually reach the plants. It will then turn to the PPFD.

Density Flow Photosynthetic Photonics (PPFD) therefore measures the entire PAR light that enters a plant every second. The PPFD is a measuring point to a specific location on your canopy, and is expressed in micromoles per second per square meter. 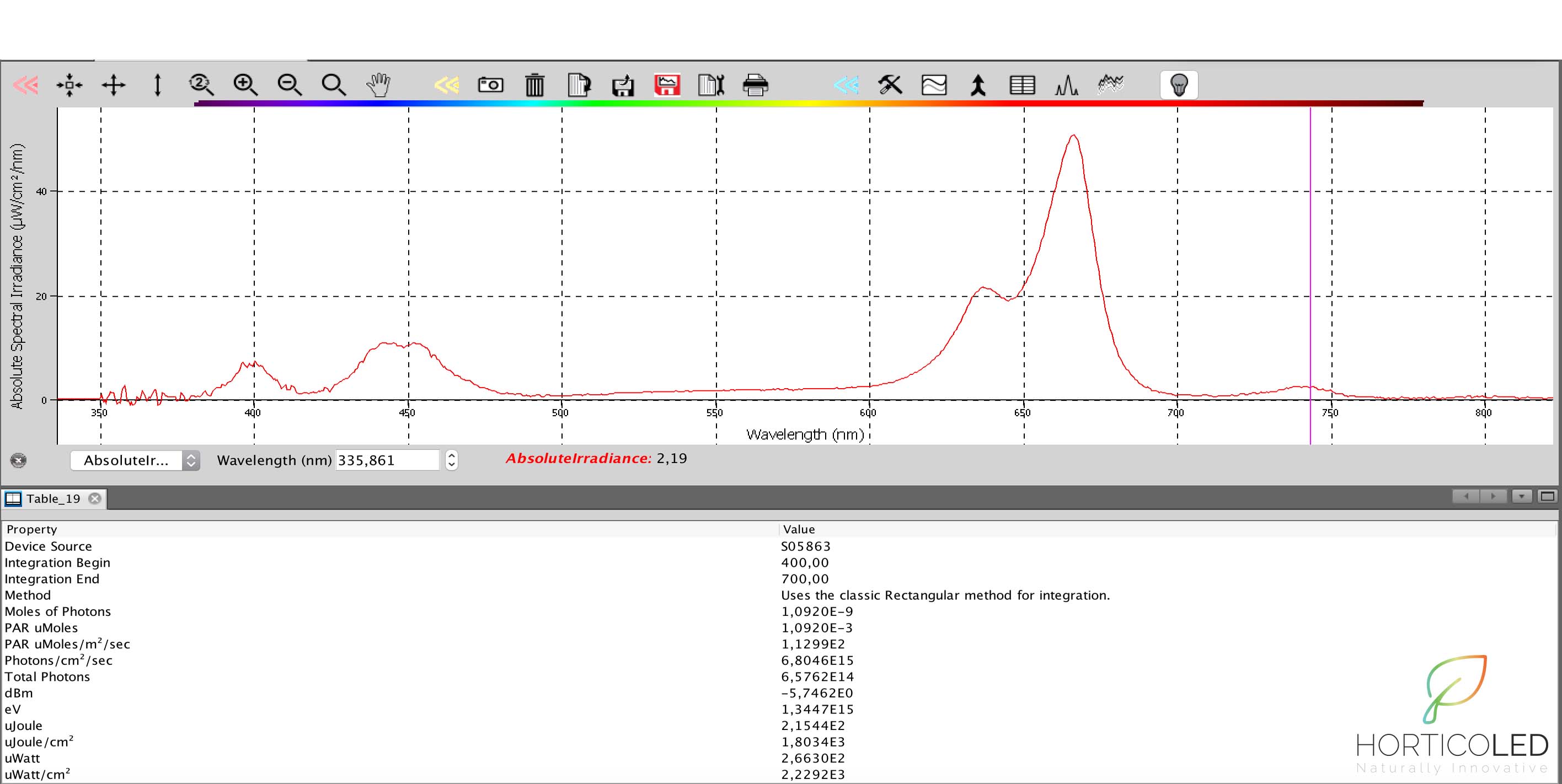 The third measure is the Daily Light Integral (DLI) which calculates the entire light provided to a plant per day. The farmer can choose DLI as a reference in light daily intakes given to his culture. DLI is expressed in moles per square meter per day.

An enclosed space with a LED lighting system with low PPF may emit the same DLI than that of a horticultural LED with a strong PPF if it extends its photoperiod. The DLI is very useful to determine the overall growth of your plants. Once you know the favorite DLI of your plants, you can easily install a lighting system that will provide the required volume of light.

Now what do we do with all this information?

Take the example of our horticultural lighting XMAX 6 v4

Tomatoes DLI is between 14 and 20 moles per meter squared per day. Our XMAX 6 v4 generates 626 micromoles per second at 45 cm away from the canopy. To ensure the perfect photosynthesis for our tomatoes will therefore require between 6:15 and 8:50 of light per day with this set up.

Do the math!
The formula to calculate the DLI with a quantum meter:

The Horticoled team can accompany you in all your project culture. From simple greenhouse cultivation, to automated multi-layer cultivation according to your farming goals and budgets.